ANOTHER WORLD:
Losing Our Children to Islamic State
Written by Gillian Slovo Developed with Nicolas Kent from his original idea

Over the last twelve months headlines have been dominated by the growth of Islamic State, and terror attacks claimed by IS have spread across the world.

What is the entity that calls itself Islamic State? Why are some young Muslim men and women from across Western Europe leaving their homes to answer the call of Jihad? And what should we do about it?

This piece of verbatim documentary theatre, written by novelist Gillian Slovo using material from the interviews she conducted and directed by Nicolas Kent, is the result of many months researching Islamic State, meeting people affected by the organisation and involved in the fight against it. 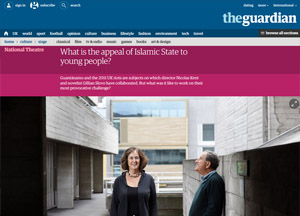 The Price of Oil

All The President’s Men?